SENSEational Story Time: "How Do You Feel?" 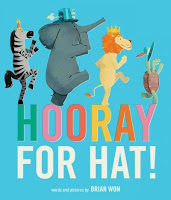 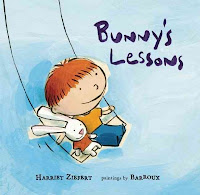 It was another snow-filled Saturday last month, but our SENSEational Story Time families (including a new family!) said "they wouldn't miss it!" Yay! We celebrated by having fun with our feelings. We talked about how friends (and the help of a few silly hats) can make us feel better. Then we learned how our actions (and the acts of others) make us feel with lessons from a bunny. 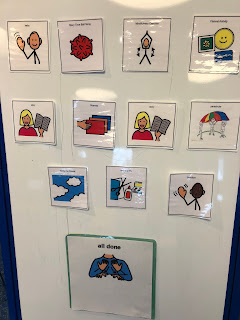 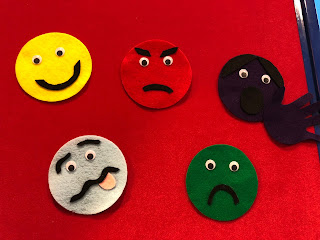 I gave the kids scenarios and then we pointed to the expression that best fit how we would feel in each situation.

Yellow - "happy"
What if your parents gave you a big box, and inside the box was a puppy? How would you feel? What does your face look like when you are happy?

Purple - "surprised"
What if you walked into a room and everyone yelled "happy birthday!?" How would you feel? What does it look like when you're surprised?

Purple - "scared"
What if those people who yelled scared you? What does your scared face look like? (put hands over eyes on face)

Red - "angry"
What if someone pushed you and made fun of you, or took your favorite toy? How would you feel? What does your face look like when you're angry?

Blue - "silly"
Do you like to be silly? Make a silly face!

Green - "sad"
What if you fell and skinned your knee? How would you feel? What does your face look like when you are sad?

5. Story with interactive flannels: Hooray for Hat! by Brian Won 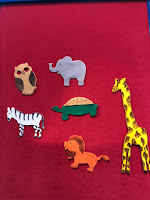 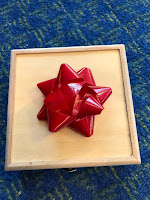 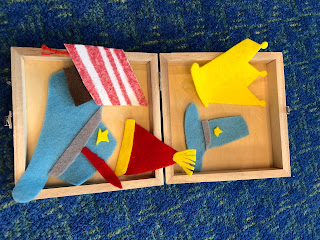 After a grumpy Elephant opened his gift of wonderful hats, he gave one to each of his friends, who then gathered all of the hats together again to gift to Giraffe so he would feel better! I had some helpers in story time gather the hats from all of the animals to place in the box, one at a time, for Giraffe.

6. Scarf rhyme: "Shake My Sillies Out"
I had the kids choose a scarf color to shake based on how they were feeling (like we talked about earlier in the expressions game). 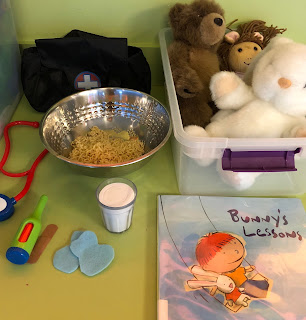 During the story, kids were invited to put bandaids on our bunny puppet, touch/feel his noodle lunch, help Charlie feed "baby" bunny his milk, paint (flannel) splotches of blue on bunny, and then we all gave ourselves a big hug in the end (like Charlie and bunny).

9. Goodbye song and stretch: "Tickle the Clouds"
Tickle the clouds.
Tickle your toes.
Turn around and tickle your nose.
Reach down low.
Reach up high.
Story time's over.
Wave goodbye!

We stretched our balloons out, rolled up play dough "worms," and stuffed them into our balloons. Caregivers tied a knot at the bottom of the filled balloons so the kids could draw faces on their stress ball. Then we squeezed!! 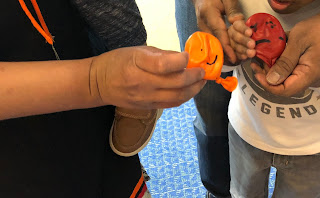 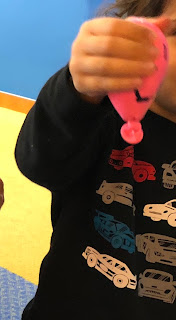 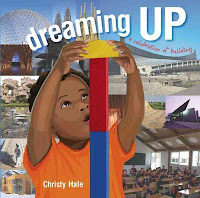 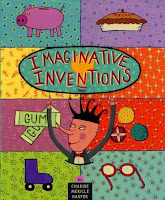 I was invited to be an advisor on the Super Spark accessibility committee at the Michigan Science Center last year. I volunteered as a guide during one of the Super Spark Special Needs Awareness Weekends and later met with museum staff and local disability advocacy group leaders to consult on ways to make the museum more accessible and welcoming to families of all ages with disabilities. Check out their accessibility page:http://www.mi-sci.org/accessibility/. They also offer visitors with sensory sensitivities a color-coded sensory map, indicating areas with especially loud sounds and bright, flashing lights. The museum offers accessible days geared to families with special needs one Sunday a month and accessible field trip days for special education groups the second Tuesday of the month. A couple months ago, Ed and I were invited to present a STEM-themed multi-sensory story time to a group of students with various learning disabilities in grades 4 - 6 on one of the field trip days. We went with an Engineering & Inventions theme to go along with what they were learning that day. 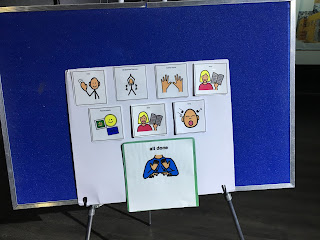 1. Hello -- "Today we are talking about engineering and inventions. Have you ever built something? What is your favorite invention?"

2. Mindfulness exercise: "Balloon breaths"  -- holding our imaginary balloon, take deep breaths and blow up your balloon until it's "so full," then release it (repeat).

3. Activity rhyme: "Building a Skyscraper"
Brick by brick
by brick by brick.
My building's so high
it's scraping the sky.
(place fists one on top of the other, going higher each time)

Brick by brick
by brick by brick.
Now I'm ready to stop
and a flag goes on top.
(open one fist and wave left and right)

4. Story: Dreaming Up: a Celebration of Building by Christy Hale 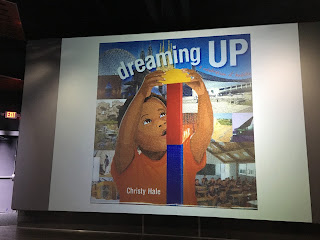 We scanned and projected this story on their big screen for this large group and added sensory experiences from the story -- touching water and clay (like the village in Egypt made from the four basic elements of earth, water, sun, and air), inviting a few students up to make a fort with blankets and chairs (similar to the design of the Yoyogi National Stadium in Japan), building with Legos (to look like the housing complex in Montreal, Canada), and passing around paper tubes (imagining a whole school made from larger, heavier versions like the temporary paper tube school in China).

5. Interactive flannel activity: Building with flannel shapes
We kept the building theme going, inspired by the book Moving Blocks by Yusuke Yonezu and a Flannel Friday post from Storytime Katie and Mel's Desk. 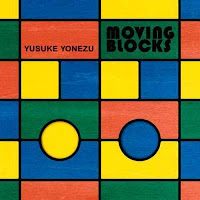 We invited volunteers up to design a car and a rocket ship with our flannel shapes. Here's the rocket ship. 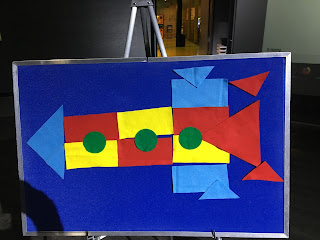 We chose a few of the invention spreads in the book that we thought the students might really enjoy and added some fun sensory experiences:
1. potato chips (We offered everyone a chip to taste of course!)
2. frisbee (The very large theater was a great space to throw and catch the frisbee with a few volunteers.)
3. doughnut (We didn't taste, but smelled the wonderful cinnamon aroma!)
4. flat-bottomed paper bag (Kids passed around a paper grocery bag from today's grocery store.)
5. chewing gum (Yes -- everyone got a piece of gum to chew. This was a favorite!)

7. Goodbye song: "The Inventor Song"
Oh it took Bell to make the telephone ring,
And it took Edison to light up our way.
It took Robert Fulton in a steamboat,
to go chug-chug-chugging down the bay.

Otis made the elevator go up,
McCormick's reaper reaped the rye.

So when you're spelling the word inventor
don't forget to dot the I!

Richard Hoe improved the printing press,
so we could get the news.
Charles Goodyear made the rubber
for the heels upon our shoes.

So if you talk about a new invention.
Incidentally don't forget to mention...

That it took Morse to make the telegraph hum
and it took Henry Ford to make an auto
so that folks could go and take a drive.
Howe knew how to make a sewing machine.
The Wrights learned the right way to fly.

So when you're spelling the word inventor
don't forget to dot the I!
(adapted from classic school song)

We received so much positive feedback from the teachers the next day. I'm not sure who had more fun though - the students or us?! 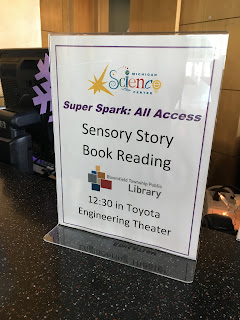 Posted by Jen Taggart at 9:13 PM No comments: